Coronavirus Update City offices closed to the public. Entry by appointment only through January 31, 2022 Read On...

About the Centennial
El Cerrito was incorporated on August 23, 1917, and the City celebrated its centennial during 2017. Events were held throughout the year -- everything from pancake breakfasts to historic talks and hikes to films and musical performances. See details about the events here and here. Many local groups and organizations helped share El Cerrito's history and celebrate the centennial, including the El Cerrito Historical Society, El Cerrito Trail Trekkers, Friends of the Cerrito Theater, Contra Costa Civic Theatre, El Cerrito Branch of the NAACP, St. Peter CME Church, Unitarian Universalist Church of Berkeley, Sycamore Congregational Church UCC, the El Cerrito Library, the El Cerrito Art Association, and the Shadi Holiday Display Committee.

The Centennial Celebration weekend in September included events such as a film at the Cerrito Theater, a family movie night in Cerrito Park, and a teen dance. The weekend also featured a parade through town, with almost 900 participants in over 50 units: outstanding citizens, businesses, clubs, organizations, schools, City representatives, pioneer families and more. The parade wound through town and ended at Cerrito Vista Park, where the festivities and entertainment continued: games, food, booths, music, magic, and dance performances.

See some photos from El Cerrito's largest parade! There is also a video of the parade. You can also see photos of the Centennial Gala dinner.

A passport activity was created and more than 1,000 passports were distributed. Event attendees were encouraged to collect a stamp in their passport at each centennial event they attended. The passports could be submitted in order to be entered into a drawing to win one of several prizes, including a prize for the entry with the most stamps.

The Centennial Celebration Planning Task Force was instrumental in helping develop plans for the centennial year, including gathering community input, developing proposals, and assisting with the implementation of the Centennial Celebration plans once approved by the City Council. The members of the Task Force were:
At the December 19, 2017,City Council meeting, the Council thanked and dissolved the Task Force, and prize winners for the passport activity were announced.

Thank you to everyone who helped out with centennial events and all those who attended events -- it wouldn't have been the same without you. We look forward to another celebration in 100 years!

On August 23, 2017, a time capsule was dedicated inside City Hall. The time capsule, to be opened on the occasion of the City’s bicentennial in 2117, contains a wide variety of items (from clothing to flags, maps, photos, and so much more) from life in El Cerrito in 2017, donated by community groups and organizations, and City departments. The time capsule also includes journals that community members wrote and drew in. View a list of contents in the time capsule.

The stainless steel capsule sits on a custom-made pedestal made from reclaimed urban trees donated by West Coast Arborists. 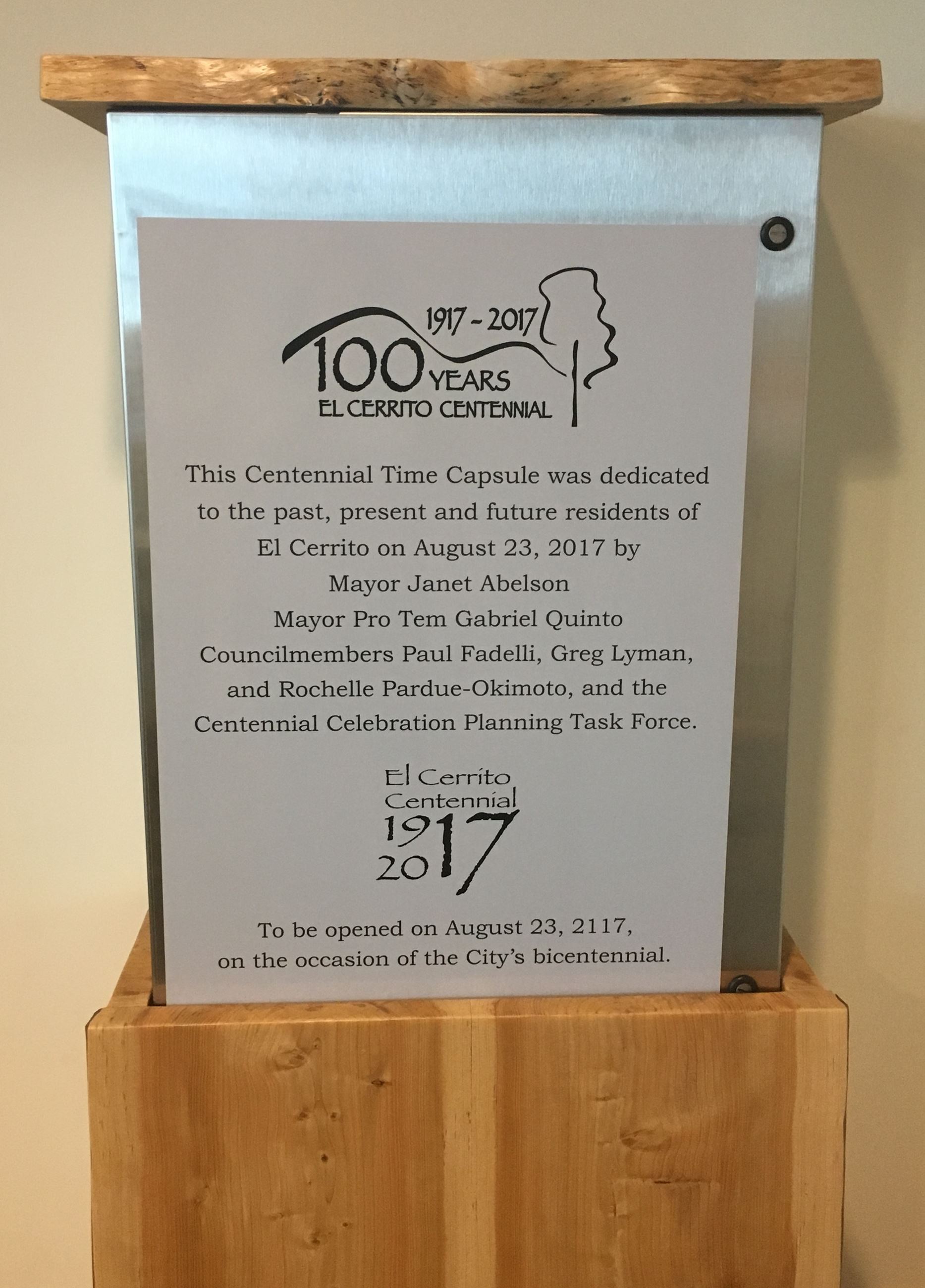