In 2013 and 2014, a group of dedicated community members encouraged the City to purchase the Madera Property, an approximately 8-acre property (marked in red on the map below) to expand the Hillside Natural Area and connect the North and South areas of the existing HNA.

Members of the El Cerrito Trail Trekkers, the El Cerrito High School Mountain Bike Club, Friends of Five Creeks and others, came together in 2013 to form the El Cerrito Open Space Campaign to raise funds to help the City purchase the 8-acre Madera Hillside Open Space property. The Campaign raised over $100,000 towards the purchase, which was completed in 2014. The City received a $250,000 National Park Service Land & Water Grant and support from the Trust for Public Land. The City utilized $120,066 of Measure WW Park Bond funds towards the purchase.

The City would like thank everyone who donated towards the acquisition of the Madera Open Space Property. See a list of donors. 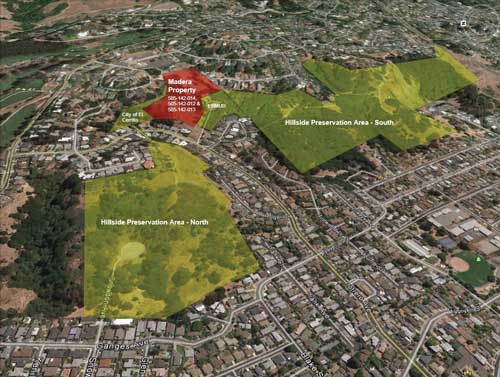 Your help is still needed to support maintenance and improvements of the HNA for the public's safety and enjoyment. Donate online today.

Thank you for your support of open space in El Cerrito.

The Hillside Natural Area includes woodlands and grasslands and surrounds an old quarry. The undeveloped open space provides wildlife habitat, native vegetation, urban forests and riparian corridors next to trails, paths, stairs and open passive recreation areas with views of the San Francisco and Oakland skylines, the Golden Gate Bridge, Mount Tamalpais and the Bay.
A number of walking and hiking trails can be accessed from the east end of Schmidt Lane, north end of Potrero, and through King Court.  The Memorial Grove entrance is just below the Recycling & Environmental Resource Center at 7501 Schmidt Lane, El Cerrito. Dogs, under their owner's control and on a leash, are allowed in the Hillside Natural Area. Campfires and any open flames are STRICTLY PROHIBITED at all times.

Much of the Hillside Natural Area was gifted to the City of El Cerrito by various donors, including owners of the quarry located at the end of Schmidt Lane. Additional acquisition and construction of playgrounds and ball fields was identified in the 1964 Park Bond Measure and associated plan, but the area was later identified as a significant natural resource and has since been preserved as open space.

On July 16, 2013, the El Cerrito City Council authorized the City Manager to enter into a Purchase and Sale Agreement and a Professional Services Agreement with the Trust for Public Land for the acquisition of approximately 7.6 acres of open space property adjacent to the Hillside Natural Area (APN 505-142-014, -012 and -013) for conservation and recreation purposes and for acquisition related and fundraising assistance.

TPL purchased the property in late August 2013 and held the property until December 17, 2014 to allow time for public grant and private fundraising to take place on behalf of the City. The City completed the purchase in 2015.

The Trust for Public Land ("TPL") is a national, nonprofit, land conservation organization. Visit them online at www.tpl.org.

The El Cerrito Trail Trekkers are a local group working to identify, improve and document the paths of El Cerrito for the enjoyment and increased safety of the community.