COVID-19 UPDATES Stay home order has been extended through at least January 7. Read On...

A brochure describing AB 2923 and how it affects BART’s TOD Program may be downloaded here.

BART Board of Directors to Discuss AB 2923 Technical Guide and Draft AB 2923 Development Principles at July 23, 2020 Board Meeting

The BART Board of Directors discussed AB 2923 (Chiu/Grayson, 2018) at its regular meeting on July 23, 2020. The meeting materials are available on BART’s website here. BART staff presented information on A Technical Guide to Zoning for AB 2923 Conformance, that was available for public comment until August 7, 2020. All materials for AB 2923 are posted on the project website www.bart.gov/AB2923.

The San Pablo Avenue Specific Plan (Plan), adopted by the City Council in 2014, fosters new housing opportunities in Priority Development Areas connected to transit and commercial uses. The Plan encourages high-density, mixed-use multi-family housing projects that will include affordable and market rate housing units as well as new commercial/retail space. Projects in the Plan area that are centered around the two BART stations (Transit oriented Higher-Intensity Mixed Use district) are permitted to build up-to 65’ by right and other areas up-to 55’ by right with reduced parking requirements. There are some exceptions that could allow up-to 85’ or 65’ if project qualifies under the State Density Bonus Program. For information about Specific Plan projects, visit our major projects page at www.el-cerrito.org/MajorProjects.
The City is currently working to update components of the Plan. To learn more about this effort and how you can participate, please visit www.el-cerrito.org/SPASP.

Given that the City’s San Pablo Avenue Specific Plan, Climate Action Plan and Economic Development Plan aligns with BART’s TOD goals, BART is currently working the City to develop a Request for Qualifications for a development partner, expected to be released in Spring  2020, for TOD at El Cerrito Plaza Station.

In 2019, BART kicked off a series of community engagement and City Council meetings to discuss TOD at El Cerrito Plaza Station. The preliminary community input received was used to develop TOD Goals & Objectives as the guiding vision for El Cerrito Plaza Station. In January 2020 the BART Board of Directors authorized staff to proceed with the next phase of this project which includes a Request for Qualifications (RFQ) to identify a development team. The RFQ is slated to be released in July 2020. The selected developer will enter into an Exclusive Negotiating Agreement (ENA) with BART. With a selected development team, City staff will continue to partner with BART throughout this process. The project will integrate community benefits and amenities for El Cerrito include affordable housing, public open space and art, transportation infrastructure improvements. The RFQ asks potential developers to study including a new library at the site. BART has received State and Federal grant funding to study and identify parking strategies to enhance station access. With both a developer on board and grant funding to continue to work on parking and circulation, City staff and BART will host numerous community engagement and input opportunities.


Request for Qualifications for Development of the El Cerrito Plaza Station - July 21, 2020

BART announced the availability of approximately 8 acres of property at the El Cerrito Plaza BART station for transit-oriented development. BART intends to ground lease the sites for a mixed-use, mixed-income development. The Request for Qualifications for interested developers or development teams is available on the project website here. Submittals from interested teams are due September 9, 2020 at 4:00pm. If you are a developer who may be interested in responding to this RFQ, please email ECPlaza@bart.gov to coordinate your involvement in the Small Business Networking Session.

Over the next 2 years, Holliday Development and Related will engage with the community through the design and planning processes as the project takes shape. During this time, the City will explore whether the project would include a library. Other public benefits that will be considered at this site include affordable housing (minimum 30% set aside), public open space, private/common spaces and retail/commercial uses. 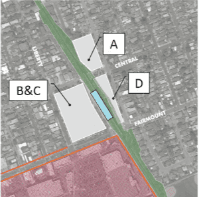 The BART Board of Directors authorized the General Manager to enter into an Exclusive Negotiating Agreement (ENA) with Holliday Development and The Related Companies of California for Transit-Oriented Development at the El Cerrito Plaza BART station.
BART Board of Directors Meeting
What: El Cerrito Plaza TOD Development
Date: November 19, 2020
Time: 9:00 a.m.
Location: Teleconference
Click here to view the meeting materials.